Sinocalliopteryx and its feathered fast food

What’s so exciting about the recent report by Xing et al. (2012) of the feathered meals of a fuzzy compsognathid dinosaur known as Sinocalliopteryx? I mean, we’ve known for years that dinosaurs ate other dinosaurs, right? To me, this is a fine example of how the investigative power of paleontology is growing as its knowledge base increases, and shows how fossil remains have so any more stories to tell than just the appearance of the animal that left them. 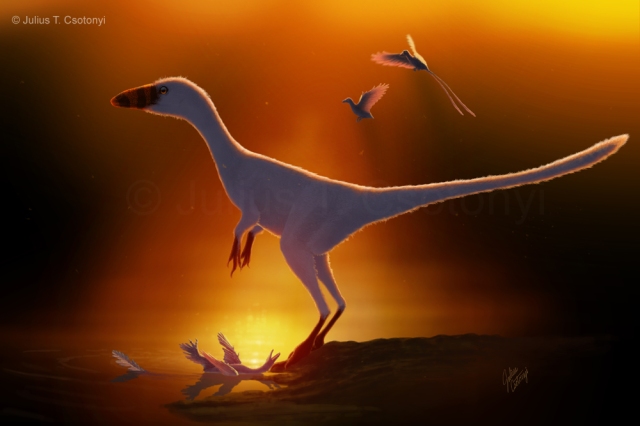 Sinocalliopteryx standing over its Sinornithosaurus prey, as a breeding pair of Confuciusornis take flight behind. Both latter genera have been found as prey of different Sinocalliopteryx individuals. The scene is set on the shores of the lake in which they will ultimately be preserved in ash. Image source: Julius T. Csotonyi

As you may have read, the news is based on two skeletons of a flightless dinosaur with filamentous plumage, Sinocalliopteryx, from the wonderful Yixian Formation of China, from volcaniclastic lacustrine deposits (volcanic ash transported by wind or water and deposited in a lake — great for preserving fine anatomical details). The first skeleton, designated JMP-V-05-8-01, was the original specimen from which the species was described, and was noted to contain a limb of another theropod in its abdomen even when it was described (Ji et al., 2007). This limb has since been shown to belong to a feathered dromaeosaurid, Sinornithosaurus (Xing et al., 2012). The JMP-V-05-8-01 individual has the exceptionally complete skeleton of which you frequently see photos for this genus. The second skeleton, designated CAGS-IG-T1, is incomplete but the portions that have been recovered contained gut contents that have been diagnosed as the early bird, Confuciusornis, and also part of an ornithischian dinosaur. 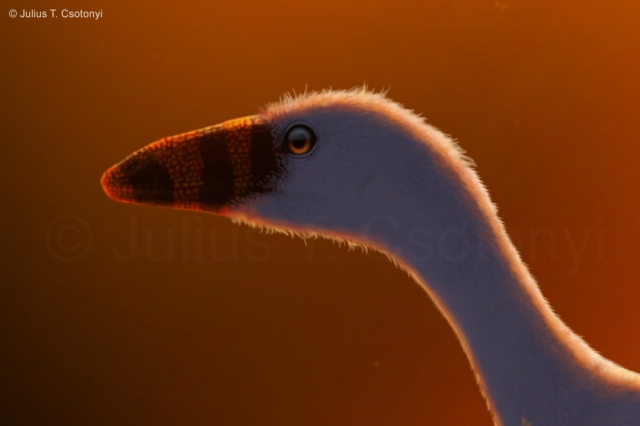 What can Sinocalliopteryx fossils teach us beyond just morphology?

Aside from the exquisitely fine state of preservation that the Sinocalliopteryx fossils exhibit, allowing us to know precisely how their bones fitted together and even the appearance of their long filamentous feather-like integument, this kind of composite fossil evidence also reveals how prehistoric ecosystems functioned, and how their component species interacted with each other. This interaction of prehistoric organisms with each other and with their environment, encompassing a field of study known as paleoecology, provides some very important pieces of the puzzle of knowldge.

The way that an animal’s remains are associated with trace fossils (footprints, skin impressins, coprolites — fossilized poop, etc.) and with the fossilized parts of other animals with which they are preserved can reveal how they behaved or interacted with each other. When we consider the fossils from a particular locality, simply enumerating the species that lived contemporaneously is akin to reading the cast of a movie. Knowing something about how they interacted — their paleoecology — is like piecing together the movie’s plot or script. It gives us a much richer snapshot of what life was like in these extinct biological communities.

A lot more can be gleaned from fossils such as these Sinocalliopteryx than merely that dinosaurs ate other dinosaurs, especially when related observations from paleontology are brought to bear on the study. For example:

(1) Lida Xing and colleagues used the shape of the gastrointestinal tract of another phenomenally preserved small theropod, Scipionyx, to help determine how the digested meal of Sinocalliopteryx progressed through the digestive tract of the latter.

(2) The authors noted that the second specimen of Sinocalliopteryx (CAGS-IG-T1) contained a highly pitted and therefore relatively more digested scapula (shoulder blade) of an ornithischian dinosaur, possibly either Psittacosaurus or Yueosaurus. Poor Psittacosaurus — always getting eaten. First, embarrassingly, by a mammal known as Repenomamus (Hu et al., 2005), and now possibly by Sinocalliopteryx. The advanced state of digestion implied that unlike modern predatory birds, which expell bones by regurgitation after consuming their prey, dinosaurs such as Sinocalliopteryx passed bone material right through their digestive system. This has implications on their stomach acidity. The reason that modern birds regurgitate bones is that their stomach is not acidic enough to sufficiently soften ingested bones, making them a hazard to retain. The authors pont out that modern alligators (a sister archosaur group to dinosaurs), by contrast, can make their stomach significantly more acidic (pH of 1.2) by shunting deoxygenated blood to the stomach, allowing them to deal with large boney meals. These observations suggest that Sinocalliopteryx (and other dinosaurs, based on the boney contents of coprolites) may have possessed a digestive system more similar to that of their crocodilian cousins than the feathery descendents of dinosaurs.

(3) The CAGS-IG-T1 specimen possessed in its abdomen the remains of at least two Confuciusornis. This raised the interesting prospect that Sinocalliopteryx was active and agile enough to hunt flying prey despite being ground-bound itself. Of course, the authors admit that it might have simply scavenged dead birds — which are a whole lot easier to catch — but they also pointed out that the probability of a scavenger finding not one but two downed individuals of the same species in rapid succession (both Confusiusornis specimens were at a similarly low early stage of digestion) seems low (unless, perhaps, they were both the victims of a widespread phenomenon, such as volcanic carbon dioxide degassing, but this, too, seems unparsimonious). Add to this the fact that the JMP-V-05-8-01 specimen had fed on the feathered (and possibly flight- or at least gliding-capable) Sinornithosaurus, and the case for a cat-like, bird-hunting, ambush-predator strengthens (Xing et al., 2012).

Male (with long caudal feathers) and female Confuciusornis. Parts of at least two of these early birds were found in the abdomenal region of the CAGS-IG-T1 specimen of Sinocalliopteryx. Like all earliest birds, Confuciusornis possessed three clawed fingers on each hand. Image source: Julius T. Csotonyi

So the Sinocalliopteryx skeletons have, by way of the high-fidelity preservation of the original positions of their components, gut contents and all, taught us about not only their morphology, but also their digestive processes, dietary preferences and probable level of activity and agility. Not bad for some silent bones.

Some other spectacular fossils (just a very short list of myriad others) that have yielded valuable paleoecological insights include the following.

Psittacosaurus (the ornithischian dinosaur whose putative remains were found in the abdomen of one of the Sinocalliopteryx individuals) deserves special mention, for several specimens have provided surprising paleoecological insight. As described above, the badger-like Cretaceous mammal, Repenomamus, was found with the remains of young Psittacosaurus in its abdomen (Hu et al., 2005), illustrating that mammals occasionally reversed the direction of the arrow of predation on dinosaurs.

Furthermore, not only did an exquisite specimen of Psittacosaurus from the fine Yixian sediments demonstrate that some ceratopsians possessed long, bristle-like integumentary structures on their tail (Mayr et al., 2002), but a tight group of 34 juveniles were unearthed with a single adult animal in another find (Meng et al., 2004). The ossification of the bones of the young implied that they were juveniles, not embryos, and provided impressive support for parental care in this genus.

A delicately preserved fossil of a small troodontid, Mei, also from the Yixian formation, was curled in a posture typical of modern sleeping birds when it was buried by volcanic ash (Xu & Norell, 2004), suggesting that some avian behaviours may be very old, perhaps originating in their common ancestor with sister theropod groups. Alternatively, such behavioural modes may have evolved independently more than once. 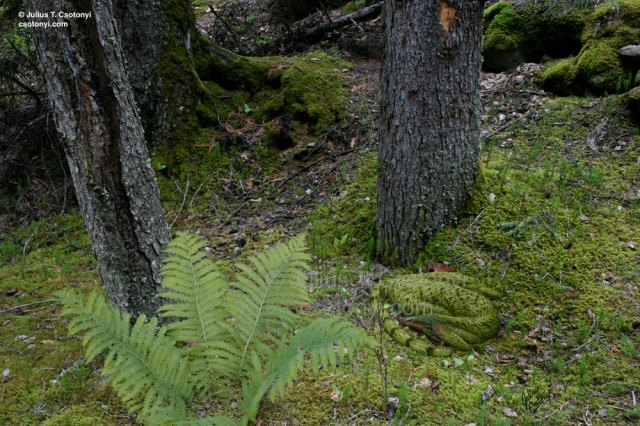 Mei, reconstructed in the sleeping posture in which its remains were found. Image source: Julius T. Csotonyi

Catching animals in the act of predation is rare, but sometimes death strikes at such moments, and if we are extremely lucky and conditions are just right, they my be fossilized. Examples include a titanosaur nest with eggs, being invaded by the snake Sanajeh, implying that predation by snakes was one of the hazards that faced dinosaur eggs and hatchlings (Wilson et al., 2010).

Reconstruction of the remarkable fossil of the prehistoric snake, Sanajeh, raiding the nest of a titanosaur. Image source: Julius T. Csotonyi

Several fossils of Cipati (a relative of Oviraptor) have been found brooding clutches of eggs (Norell et al., 1995; Clark et al., 1999), which seems to imply that death by sand burial while administering parental care was a disturbingly common fate for this animal.

There’s the beautiful recent find of a pregnant plesiosaur (Polycotylus), which showed us that these marine reptiles shared K-selected viviparous (giving live birth) reproductive life history characteristics with cetaceans (whales) and ichthyosaurs rather than their oviparous (egg laying) reptilian relatives, sea turtles (O’Keefe & Chiappe, 2011). K-selected organisms invest relatively much energy into the production of young, employing a strategy of maximizing the survival of a few young rather than releasing many small young that each have a lower probability of survival. The K-selected strategy is typically used by organisms whose population is relatively stable and often near the carrying capacty (K) of the environment.

Inferences about paleoecology do not always demand fully articulated skeletons. For example, bones of hadrosaurs (duckbill), Triceratops and Tyrannosaurus bearing characteristic tooth scrapes can tell us that Tyrannosaurus not only fed on certain groups of herbivores but also exhibited cannibalism (Longrich et al., 2010). However, as the Sinocalliopteryx findings demonstrate, the preservation of some types of behaviour or physiological characteristics do require exceptionally high quality of preservation, because some types of information can only be conveyed by the relative orientation of preserved parts with respect to each other.

Hence, geological formations generated by environments that catalyzed high quality fossilization are crucial to a fuller understanding of how life played out in the distant past. These formations represent the clearest snapshots of the past, as if some giant slapped shut a giant phonebook on nearly an entire ecosystem and pressed it like so many flowers. Such fossil localities that are remarkable for their diversity and/or quality of preservation are known as lagerstätten. Many of the finest examples of how prehistoric organisms interacted with each other come from lagerstätten.

For a time span of over half a billion years, a list even several times this size would be tear-jerkingly short. Imagine how many fascinating snapshots of time we will never be able to view from the biosphere’s early years because the conditions of fossilization were, as is usually the case, unfavourable for the pristine preservation that is needed to piece together the ecological script. Fossilization is such a finicky process that we should not be surprised to find gaps in the fossil record. It is also why those rare gems of geological formations that we do find are so vitally important to understanding the history of our planet.

This entry was posted in Uncategorized. Bookmark the permalink.

5 Responses to Sinocalliopteryx and its feathered fast food