When did the dinosaurs die out and how can we be sure? That’s kind of a trick question, actually, for evidence suggests that birds are the direct descendants of a group of small theropods (bipedal meat-eating dinosaurs). Therefore, not all dinosaurs have gone extinct. 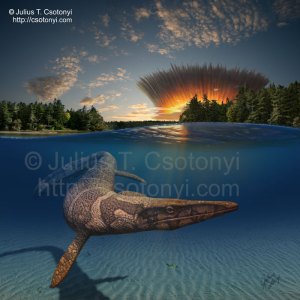 Tylosaurus and the K-T impact event at the end of the Cretaceous. (Image: Julius T. Csotonyi)

Nevertheless, the vast majority of dinosaurs (the non-avian dinosaurs) died around 65 million years ago. Dinosaurs were the dominant terrestrial life forms on earth for over 160 million years, so it must have taken quite a disaster to wipe out such a successful group. A leading hypothesis involves the impact of a 10-km (6-mi) asteroid with what is now the Yucatan Peninsula in Mexico, creating the 180-km (112 mi) wide Chicxulub crater. Even that might not have been enough to do them in, and many scientists now lean towards the idea of a one-two punch delivered by the unfortunate coincidence of a massive wave of vulcanism (volcanic activity, from the Deccan Traps in India, a huge lava field) taking place at nearly the same time as the asteroid impact. Both events would have caused massive changes in global climate and therefore vegetation growth. In fact, the dinosaurs may already have been highly stressed by the time the fateful asteroid entered earth’s atmosphere.

However, it now seems as though dinosaurs may have been more tenacious than originally thought. Earlier this year, a research group at the University of Alberta led by Larry Heaman measured the age of a fossilized hadrosaur (duck-billed dinosaur) femur bone and found it to be only 64.8 million years old [1]. This may not look like a big difference, but it would mean that some dinosaurs may have survived the asteroid impact by about 700,000 years. That’s more than twice as long as humans of our species have been on earth. How could such a thing happen?

Actually, this should not surprise us too much if we really thing about it. If we know anything about life on earth, it is best summed up by Ian Malcolm’s line on Jurassic Park: “Life finds a way”. It’s very rare for an ecological disaster to wipe out all of something immediately. Usually, something survives, partly because the environment is heterogeneous enough to provide protected places where some life just happens to be located during the disaster. It’s akin to taking cover in the basement when a tornado passes overhead; the winds cannot reach some places. Similarly, there may have been places on earth where the dust and ash clouds raised by the asteroid impact cleared earlier, allowing earlier return of vegetation (and in turn, herbivores and the carnivores that fed on them).

The asteroid impact at the end of the Cretaceous was by no means the worst environmental disaster that life on earth has survived. There were times in earth’s distant past (710 and 635 million years ago) when nearly the entire planet was sheathed in ice. These events are known as “snowball earth”, and they made the recent ice ages with which we are familiar look like mild spring days by comparison. But even then, life found refuge near the equator, where the conditions were not quite as bad. Holing up in the relatively few life-sustaining niches, organisms quickly recovered (and diversified extraordinarily rapidly during the Cambrian period) once conditions improved. Later, at the end of the Permian period, about 251 million years ago, a global disaster involving massive climate change wiped out about 90% of life on earth. Again, however, even though this disaster took with it most of the bizarre mammal-like reptiles, a few survived, including the lineage that gave rise to mammals, and ultimately, us.

Given how unlikely the fossilization process is, it’s not surprising that we haven’t begun to see evidence of some of the dinosaurian survivors of the Cretaceous extinction event (known as the K-T boundary) at the end of the Cretaceous until just now. Fossilization is a tricky thing, requiring a narrow range of conditions for it to work (e.g. quick burial of a body by sediments to prevent scavenging, and sufficiently low oxygen concentration to prevent decomposition by aerobic, or ‘air-breathing’, bacteria). Thus, only a very tiny sliver of all living things that die are expected to be preserved for millions of years by this process. As a result, we cannot reasonably expect to find a completely continuous fossil record, and proponents of creationism that hold up the discontinuity of the fossil record as an argument against evolution are ignoring this basic principle.

Given the difficulty of fossilization, it is not surprising that paleontologists have found a gap in the dinosaur fossil record prior to the Cretaceous extinction event (which can be detected by anomalies in the distribution of fossilized pollen, as well as often the presence of the element iridium, which is found at higher concentration in meteorites). They called it the ‘three-meter gap’, for the approximate thickness of this layer that is relatively devoid of dinosaur fossils. Indeed, perhaps dinosaurs had already been on their way out by then, and the Chicxulub impact was merely their coup de grace that finally did (most of) them in.

However, if some dinosaurs did survive the impact by several hundred thousand years, then we should see their remains everywhere in between, allowing of course, for the natural discontinuity of the fossil record. The best way to see through a discontinuity is to look for evidence of bones in enough places, because this increases our chance of finding those few skeletons that did manage to experience the right conditions for fossilization, even though there were not many around to begin with. The continual search for dinosaur fossils by paleontologists serves exactly this purpose.

And not surprisingly, bones are now starting to show up in the ‘three-meter gap’ too. A Yale University group, with Tyler Lyson as lead author of the study’s report, has found the horn of a Triceratops only 5 inches below the K-T boundary, implying an age only tens of thousands to a few thousand years before the impact. This is only around 0.01% of the time since the dinosaur extinction event.

So we’re throwing around huge numbers like 65,000,000 years. How can we be so sure about the accuracy of these ages? The answer lies in radiometric dating, which deduces the age of a rock sample by the proportion of a radioactive element and its decay product that the rock contains, given an extremely precisely known rate of decay of one radioactively unstable element into the other. Physics gives us this standard, and physics is the hardest science, giving us the most precisely known quantities. Radiometric dating is quite reliable. The problem that people have with believing its results stems, amazingly, from the same few anomalous results using these techniques that proponents of creationism keep raising into the spotlight, while ignoring the mountain of results that underscore the technique’s veracity.

What I find most interesting about Heaman’s study is that they use a newly developed direct radiometric dating method (by the rate of radioactive uranium decaying into lead) of measuring the age of the bone itself, not only the surrounding rock matrix. This new method confirms the age of the dinosaur bones to about the same as the surrounding rock strata (65 million years), providing an independent line of evidence supporting the age of the fossils ages. Independent lines of evidence (i.e. measuring something using a technique that is not dependent upon another technique) is very important, because the agreement between the results of different, unrelated methods gives the results much greater credibility.

This direct dating of fossilized prehistoric bone is especially important because creationists have long bemoaned the required dependence of our calculation of the age of fossils on measurement of the rock matrix in which they are found. This method is known as relative chronology. The age of the rock, it was claimed, may not accurately reflect the age of the fossil, because the fossil may have been transported into fissures in the rock (or buried atop the rock after older rock layers had been previously exposed by erosion) long after the rock was originally formed. Demonstration by Heaman’s team that the fossils themselves can now directly be dated by a physically reliable and precise technique, independent of the age of the surrounding sedimentary rocks, blows this complaint out of the water.