Why do two dragons sleep soundly? 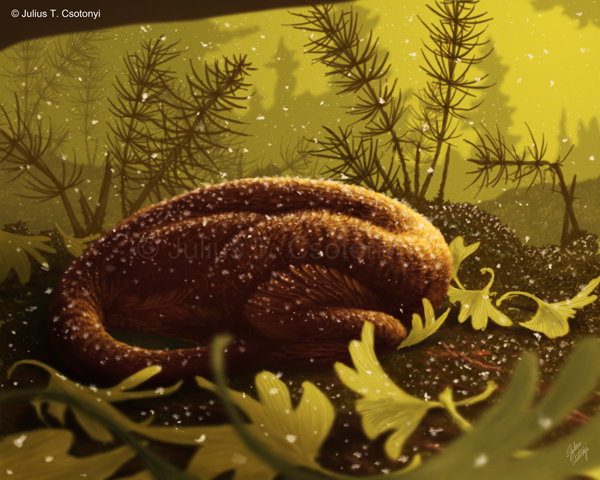 The second specimen of the small Chinese Cretaceous troodontid dinosaur, Mei long, curled up under a volcanic ash fall, asphyxiated either in its sleep or in a defensive posture. Image source: Julius T. Csotonyi.

The little crow-sized troodontid dinosaur, Mei long (meaning “soundly sleeping dragon”) was more aptly named than Xu and Norell (2004) originally realized. Now, Chunling Gao and colleages (2012) have reported their discovery of a second fully articulated specimen preserved in the posture characteristically adopted by many modern birds while they sleep: neck curved around sideways, head tucked in behind a wing, legs folded under body and (something of which modern birds are incapable, with their truncated pygostyle) long tail wrapped around the body. The only significant difference in posture between the two animals is that the new one’s (DNHM D2154) neck is bent in the opposite direction to that in the first specimen (IVPP V12733). Xu and Norell (2004) had suggested that as in modern birds, this compact body configuration minimizes the ratio of surface area to volume, thereby enhancing body heat retention, which is a significant challenge to such small homeothermic (warm blooded) animals.

Despite the fact that these fossils were found in the volcaniclastic (volcanic ash deposit) sediments of the Yixian formation, which facilitate extremely fine preservation, fossilization is a very spotty process (only two such beautiful Mei specimens are known so far). So it seems statistically unlikely that both specimens (and a partial Sinornithoides) would be found in this sleeping posture unless death and the posture were somehow related. But how?

Gao et al. (2012) point out that not all the victims of Pompei (who were similarly covered by ash as Mei) display the hyperflexion (clenching) of muscles that results from death by high temperature ash falls and fire. Therefore, (assuming that theropods such as Mei display similar neuromuscular responses to heat as do mammals) it isn’t unreasonable to surmise that the specimens of Mei died by asphyxiation from toxic volcanic gases while sleeping instead of being roasted. In this scenario, the volcanic eruptions that killed and buried the animals may have occurred during the sleeping period, and therefore represents a kind of snapshot of ‘normal’ life in this prehistoric ecosystem.

Alternatively, Gao et al. (2012) have suggested that perhaps the preserved brooding posture of Mei represents either (1) sheltering behaviour within a burrow (which may have constrained the position of the body and prevented the kind of opisthotonic neck-twisted-up-over-back posture that characterizes many dinosaur skeletons and which has been proposed to results from either a neurolomuscular response to toxins or agony, or postmortem contraction of neck ligaments), or (2) a defensive postural response to volcanic events such as ash fall. In this last case, the volcanic event may have directly influenced the preserved postures of some of the fossils that are found in its resulting sediments. In the sketch above, I have chosen to illustrate Mei curled up under a relatively cooler ash fall, and the hapless creature has been asphyxiated, either in its sleep or in a defensive posture.

The multiplicity of possible explanations for the brooding posture of Mei and the likelihood of the fossilization process to influence the behaviour of the animals that it preserves underscores the daunting and complex task facing paleontologists who strive to piece together the puzzle of prehistoric ecosystems from relatively few pieces left to them sometimes by catastrophic events.

This entry was posted in Uncategorized. Bookmark the permalink.

2 Responses to Why do two dragons sleep soundly?