Wasp-Infested Dinosaur Eggs and the Science of Paleontology

Can you concieve of a nastier discovery in your fridge than a rotting egg? How about a rotting egg full of maggots? So then why are paleontologists Jorge Genise and Laura Sarzetti so enthused by their recent discovery of the fossilized remains of a rotting insect-ridden dinosaur egg?

Have you ever cracked open a sedimentary rock and found a fossil staring back at you that had been hiding inside? Remember how exciting that was. The fossil was probably a hard shell, or, if you were lucky, a bone. But imagine how excited you’d be if you’d found the fossilized remains of a soft-bodied creature, preserved against the odds under really special conditions. You’d then have some idea of the elation that paleontologists and paleoecologists feel when they turn up remains that take so much of the guesswork out of how a creature looked or how it lived millions of years before us.

Reconstruction of a Massospondylus dinosaur nesting site from South Africa, in which eggs and hatchlings were found. (Image: Julius T. Csotonyi)

It’s like Christmas morning for paleontologists when they discover eggs containing the intact embryos of dinosaurs [1], or when they unearth an animal with the identifiable remains of its last meal in its stomach [2]. Fossils like these are really special, because they not only preserve the form of long-extinct creatures, but also help fill in their behaviour or their sequence of development from hatchling to adult. It’s like being able to take a snapshot of the prehistoric world innumerable years ago.

But a rotting egg? What can it possibly tell us about the world of the Late Cretaceous, 70 million years ago? A lot, it turns out.

A team of researchers at the Museo Argentino de Ciencias Naturales recently reported in the research journal Palaeontology their discovery of the fossilized remains of a rotting dinosaur egg that had become colonized by wasps in Patagonia 70 million years ago [3]. The soft pupae (similar to butterfly cocoons) of metamorphosing young wasps were found inside the broken dinosaur egg.

Hang on — larval wasps often feed on other insects [4] or spiders [5]. What were they doing in dinosaur eggs? Their presence weaves an interesting story of scientific inference.

The egg was that of a titanosaur, a huge long-necked sauropod dinosaur, somewhat similar in appearance to the “Brontosaurus” with which many people are familiar (Brontosaurus, by the way, has since been renamed Apatosaurus).

The titanosaur egg had been forcefully broken long before it could hatch. Life was tough for dinosaur eggs and hatchlings. Although many adult dinosaurs were huge, their eggs were comparatively very small. The eggs of over 15-m (50-foot) long titanosaurs were only as large as those of ostriches. Eggs and hatchlings provided an easily captured and nutritious meal to any small carnivore sneaky enough to make it past the parental dinosaurs guarding a nest. These egg thieves included other dinosaurs, mammals and even snakes. In fact, a remarkable fossil announced last year shows a large — 3.5-m (11-foot) long — snake preserved in the act of raiding a titanosaur nest when the entire nest, snake, eggs, hatchling and all, was rapidly buried by sand [6]. 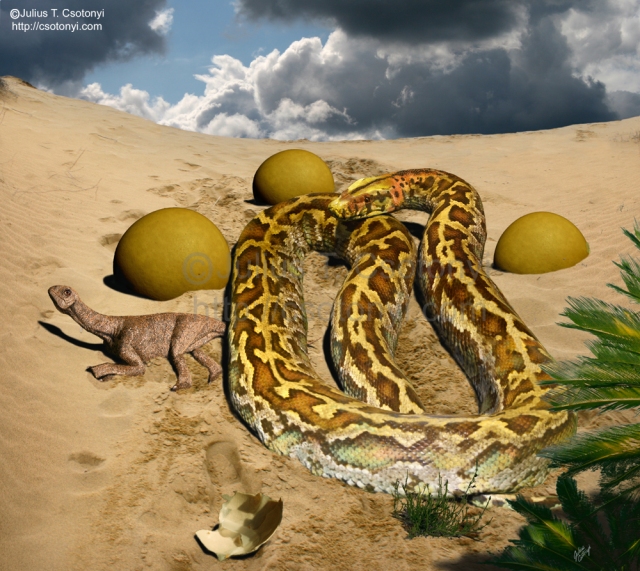 Reconstruction of the remarkable fossil of the prehistoric snake, Sanajeh, raiding the nest of a titanosaur. (Image: Julius T. Csotonyi)

Whatever cracked the egg in the present case, once the egg was broken, the dinosaur embryo died, but there was a rich source of nutrients available for the taking by insects that could squeeze through the crack and lay their eggs inside. The pungent smell of the dead, rotting egg would have attracted scavenging insects. Several groups of insects, including ants, bees, moths and beetles, colonize decaying organic matter, and mole crickets are even known to scavenge the eggs of modern-day leatherback turtles [3].

However, based on comparing the fossilized remains with living animals on the basis of the shape, size and structure of the cocoons, and their presence in eggs, paleontologists concluded that the most likely identity of the fossilized cocoons is a wasp. Because wasp larvae (the equivalent of maggots) are almost exclusively parasites (living on resources provided by another creature, at that creature’s expense without providing a benefit in return) or parasitoids (parasites that ultimately kill and consume their hosts), the presence of the fossilized wasp cocoons in the dinosaur eggs most likely implies that other insects on which the wasps were feeding were also present in the egg. The wasps were the at the top of the food chain or a food web of insects, feeding on other insects, or on spiders that fed on other scavenging insects, that had invaded the egg before the wasps arrived.

This line of reasoning is a nice example of scientific inference leading to the generation of testable hypotheses. We make initial observations (wasp cocoons in a broken dinosaur eggs) and then use what we know about living animal communities (wasps are usually the tops predators in a food chain or food web of insects and spiders) to generate a prediction or hypothesis (broken dinosaur eggs were attacked by scavenging insects) that can be tested by future observations (other broken dinosaur eggs will be investigated for the presence of scavenging insect communities).

It also demonstrates that proper scientific investigations built on testable hypotheses can be performed without the need to conduct laboratory experiments. This is an important point to make, because some people wish to argue that evolution is not scientifically supported partly because they believe that paleontological studies are not truly scientific. This is untrue, for as we have seen, paleontologists can and do make testable predictions. Although we cannot ‘rewind the tape’ of life on earth and play it back repeatedly to see how life would evolve, we can perfom what we call ‘natural experiments’, in which we make predictions about the nature of future fossil discoveries based on what ecological and evolutionary theories tell us we should expect to see. Natural experiments are more difficult to control than laboratory experiments (i.e., it is more difficult to pin down sources of variation that can affect our predictions), but they abide by scientific principles nonetheless.

A wonderful example of the predictive power of evolution applied to the fossil record is the discovery of the fish-amphibian transitional form (some may call it a ‘missing link’) called Tiktaalik (which I will cover in more detail in a later post). As writer Jerry Coyne relates [7], a University of Chicago research team led by Dr. Neil Shubin was interested in finding evidence for the evolutionary transition from fish to amphibians. Several fish-like amphibians and amphibian-like fish had already been found, but Shubin was after something that was more intermediate than any species that were then known.

Based on the ages of undisputed examples of fish and amphibians, it was hypothesized that the ‘missing link’ should be found in rocks between 390 and 360 million years old. The hypothetical beast should also probably be found in a shoreline environment, where it had access to shallow water and land. The team applied these constraints of time and place to predict the rock formation in which the animal should be found. This was possible because, contrary to what creationist proponents would have us believe, the vast majority of fossils on earth are well-organized into a layered series that reflects their geological age, with younger strata above older ones. Since rocks matching the targetted age and prehistoric habitat were known from Ellesmere Island in the Canadian Arctic, Shubin’s team set up camp there and commenced their search.

After years of excavation, they were finally rewarded with an animal that they named Tiktaalik, which had features more intermediate between fish and amphibians than any previously known species [8].

Shubin’s nearly fruitless search demonstrates how difficult and statistically unlikely it is to find especially valuable fossils. We are therefore exceptionally lucky to have in our hands examples such as the wasp-infested titanosaur egg. However, these examples also demonstrate how vastly deep and rich is the geological well of evolutionary history hidden in the earth that we may plumb if we are diligent enough.